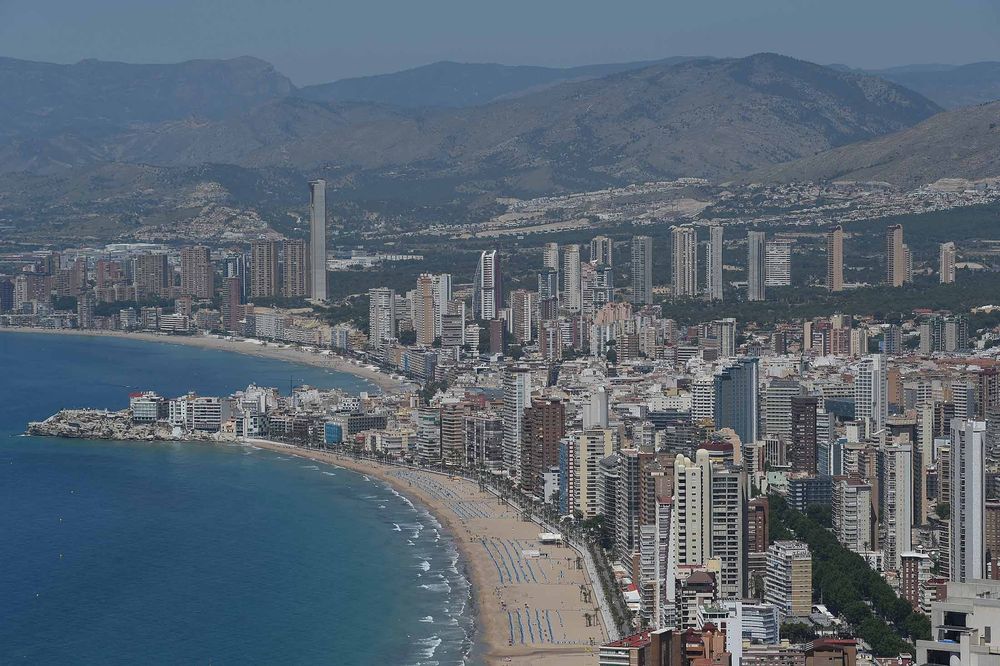 Sun, sand, and social distancing at the Spanish resort town of Benidorm, where closures are up, occupancy is down, and revamps are under way.

An article by Jeannette Neumann (Bloomberg)

Few places are as tied to mass tourism as the Spanish resort town of Benidorm. It’s often dubbed the birthplace of package tours, and on a typical summer day its broad beaches, towering hotels, and palm-lined promenades are jammed with visitors seeking sun and surf. This year it’s been more about silence and social distance.

So in mid-July, as Ramón Martínez watched the first mask-clad guests enter his 320-room Hotel Presidente after four months of lockdown, he was overwhelmed with emotion—akin to what he imagines locals felt when the first foreign tourists arrived in the 1950s. “I told the staff, ‘This is incredible,’ ” Martínez says. “It was a special moment.”

For Martínez and other hoteliers in the city, the coronavirus epidemic augurs change almost as dramatic as those early days, when Generalissimo Francisco Franco ruled the country and Benidorm was little more than a village. The city today gets about 4 million visitors a year, often flying in on packed budget airliners, sunbathing towel-to-towel, and filling clubs and bars to drink, dance, and flirt into the wee hours. That’s not a business model that works during a pandemic, says Leire Bilbao, director of the city’s tourist board. “If you don’t do things right during a crisis,” she says, “when the crisis has passed, you might be a place where people don’t want to go.”

The city of 70,000—whose population swells almost sixfold in August—has taken the measures it can, marking off squares on the beach, for instance, and allowing only four people in each. Police patrol the waterfront and order anyone without a mask to put one on, pronto. Some shops have thermoscanners at the door. More than a third of hotels remain closed, and occupancy at those that are open hovers at about 40%, vs. 90% in a normal summer. 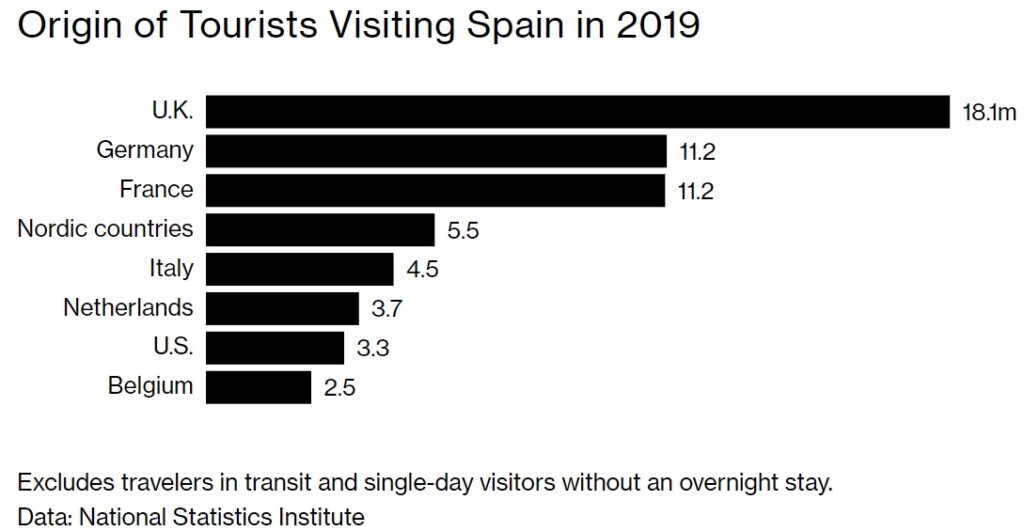 People in the hospitality industry—which is to say pretty much everyone—are bracing for perhaps half of the restaurants and bars to go bust this year. Nuria Montes, secretary general of Hosbec, a hotel trade group, says Benidorm’s businesses should seize the opportunity to “lay the groundwork” for an eventual economic recovery. “We are facing years with a lot of work and little revenue,” she says.

For hotel owner Martínez, the foundations were already being laid. He and his brother had been planning to revamp two of their four hotels when Spain went into lockdown in March. “The world changed, and we had to adjust,” Martínez says, surveying the lobby of the Presidente, with disinfectant-coated mats at the entrance and thermographic cameras discreetly scanning the reception area. The brothers adapted their renovation project and are now planning to build only double rooms, getting rid of the triples, quads, and extra beds that appeal to families or groups of friends eager to cut down on the cost of a weekend getaway or bachelor party. “That’s over, done,” Martínez says. Even when a vaccine is developed, he expects visitors will crave more space. “This is going to remain seared in our minds for a long time,” he says.

Those changes will result in a de facto price hike, though, as more guests will have to book an extra room. To avoid boosting rates, the brothers scrapped plans to apply for a fourth star even though the renovation will include four-star amenities such as larger rooms. Rates in the city had been rising—by almost a third from 2015 through last winter—but the pandemic is likely to erase those gains, and it will take several years for them to recover, according to data company BedsRevenue. “This isn’t the moment to increase prices by having a fourth star,” Martínez says.

About a week after the Presidente reopened, Spain’s coronavirus cases began rising again. Some countries discouraged trips there, and the U.K. ordered a two-week quarantine for anyone arriving from Spain, a major disincentive to travel. As cancellations flooded in, occupancy at the Presidente plummeted to 13%, and Martínez mulled shutting down. But it’s expensive to start and stop a business, so he decided to take the optimistic view and hope the restrictions will soon be lifted, allowing him to salvage some shred of the summer season. He quickly tapped a text message into his phone telling a contact at a British package-tour operator that the lights are still on. “I’ve decided to keep my hotel open,” Martínez says. “In case you change your mind, I’m here.”