Neither Marbella, nor Estepona, the Construction Madness Seizes Orihuela Costa 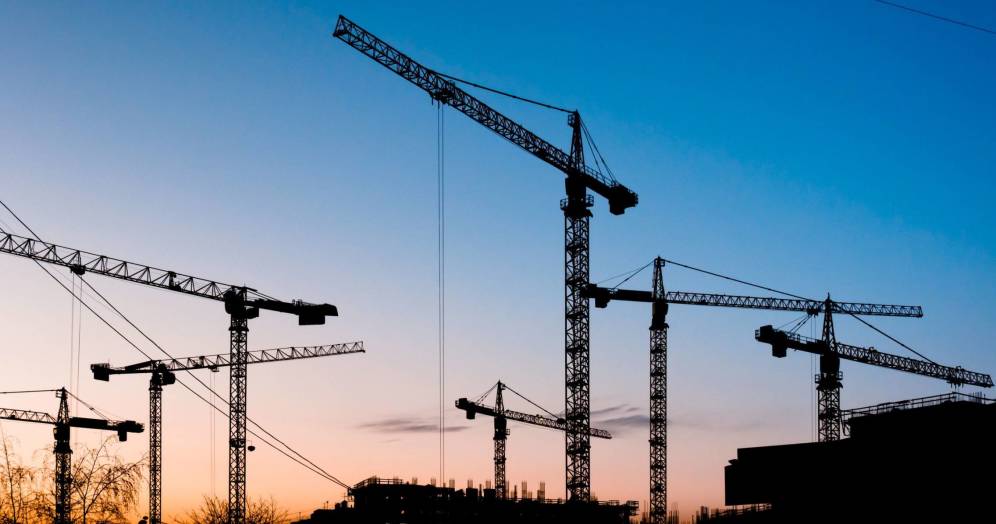 If there is a coastal town that has taken over the builder ‘boom’, above any other, that is Orihuela Costa, in Alicante. In 2017, it was the coastal town of 10,000+ inhabitants in which more homes were built ahead of very dynamic markets such as Marbella, Estepona or Ibiza. In fact, that year 1,150 licenses were issued, above the 877 in Valencia and the 808 in Alicante capital and was very close to those granted in the city of Malaga (1,283).

In 2018, the construction has slightly put the brake, but even so it was the coastal municipality -excluding the capitals – with the largest number of licenses (651) only behind another town in Alicante, Torrevieja (686), where the constructor ‘boom’ of the last six years has not been as pronounced as in Orihuela.

The data of the Ministry of Development and the graphics speak for themselves. Since 2011, long before the market touched land, real estate activity woke up in Orihuela and – although the figures are lightyears away from those of the bubble, as it happens in the rest of Spain – the truth is that it is the most dynamic point of the entire Spanish coast, even above the hottest spots on the Costa del Sol, especially Estepona, with 417 licenses in 2018. 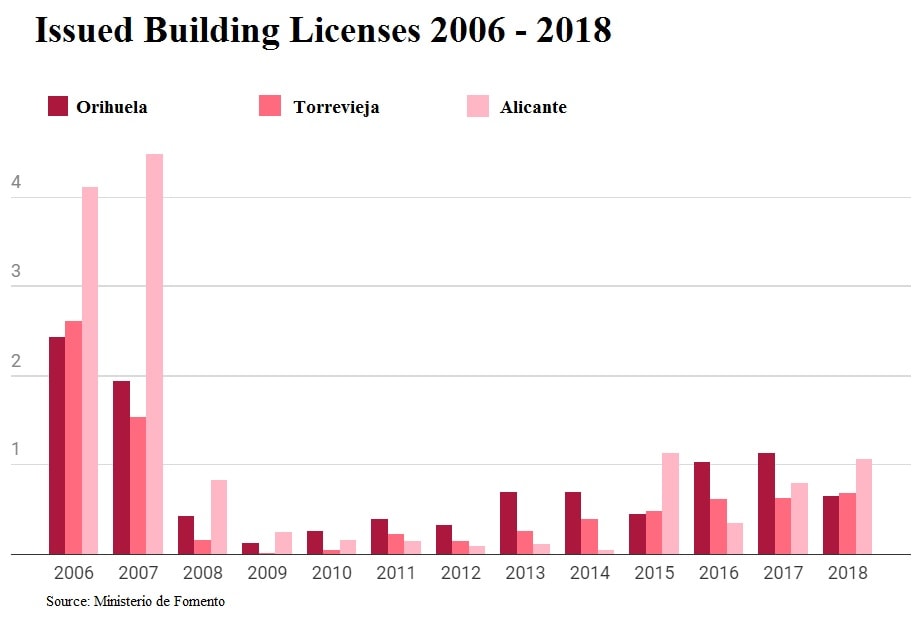 This dynamism in construction is based on a strong demand for new construction housing in the area. In 2018, according to data from Fomento, Orihuela was also, just behind Torrevieja, the coastal town in which more houses were sold. Specifically, 4,055 units compared to 5,225 in Torrevieja, 4,077 in Marbella or 2,515 in Estepona. What is happening in Orihuela? 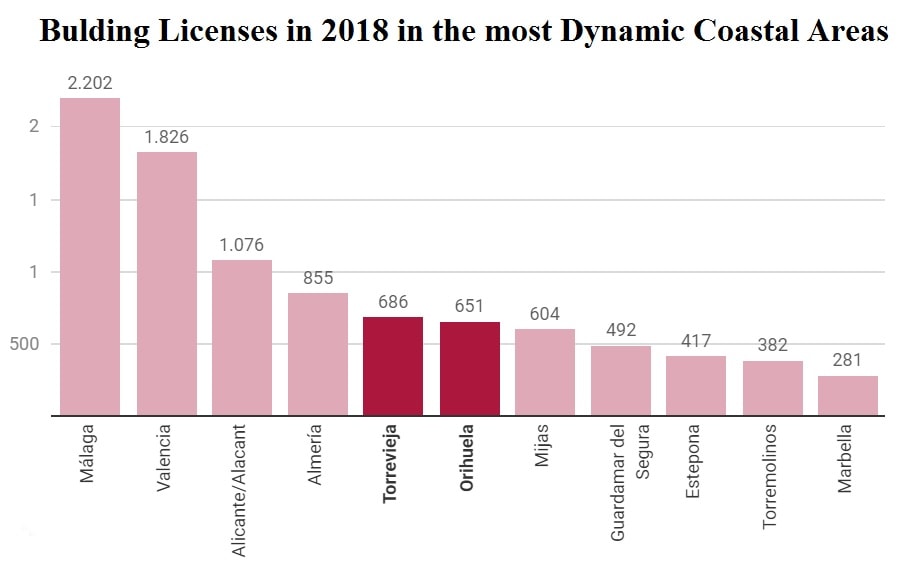 “In 2007, with the outbreak of the crisis, the construction of new buildings was halted, until 2013-2014, when large local developers who survived the crisis, got parcels of land from promoters who could not stand it. They acquired at good prices.” – explains Joaquín Cabrera Seva, Tinsa technician.

“The first developers who started their activity with projects in coastal areas close to amenities and services went to the market at low prices and were selling easily.” This situation awoke the rest of the developers who saw that demand existed and that prices of the new constructions went up as the months passed. The first ones on market were selling units for 90,000 – 100,000 euros” – recalls this expert, who says that “at present there is nothing below 160,000 euros”.

Cabrera points out that since 2014 all the agents have been activated “since they understood that the market preferred to have new quality work to second-hand housing“. And, according to this expert, “the foreign market demands almost exclusively new construction, a demand that for the most part, even in the years in which financing was difficult, has made its purchases without mortgages.” And he assures that “Scandinavians, Norwegians or Belgians demand homes without financing and they want them to be newly built, and if they are second-hand, they must be completely reformed. For some years the national market has been slowly activated, accompanied with improvements in financing, but mainly in areas closer to the coast and second hand.” – he concludes.

Are there symptoms of exhaustion?

According to the experts consulted, unlike what is beginning to be perceived in other hot spots on the map, in Orihuela there is – at least for the moment – no signs of market depletion. Prices have risen 15% last year and 22% since they touched ground, while they are still 30% below the levels of the ‘boom’.

“Since 2013, the new construction market has continued it’s growth, new construction projects continue to be sold, the number of real estate agents continues to grow, and local developers are still looking for plots of land to continue the activity. What is detected is a great distance between the sale prices of the new construction and the second hand, and the latter, since the beginning of the recovery, has not achieved such a big rise, although there is also great activity and demand.” – says Cabrera.

In the past two years Alicante has become responsible for leading the recovery in coastal areas. While the media has been focusing on Madrid, Barcelona or the two archipelagos (Canaries and Balearics), within the Valencian Community the new sprouts have spread over a good part of the region.

Alicante, with 5,915 units sold, only behind Madrid (16,972) and Barcelona (7,896), is the province with the highest number of new home sales registered last year. Exceeding even the 5,812 of Malaga, according to data from the College of Registrars. In addition, it is also the province with the highest real estate activity, 21.35 sales per thousand inhabitants, mainly thanks “to the high volume of tourist activity and buying and selling by foreigners.” – according to Millá.

To give us an idea, 40% of transactions are carried out by foreigners, the highest percentage in all of Spain, above 37% in Tenerife, 30% in the Balearic Islands and 28% in Malaga.

“Britons, Belgians and French are the nationalities most interested in buying in Orihuela, while in Torrevieja, instead of French, we see great interest on the part of the Swedes.” – says Alfredo Millá, who calculates sales of ten units a month, “which shows that the market is pulling and that demand continues to grow.”

On the other hand, as Joaquín Cabrera explains, “the Orihuela Costa area has greater potential, greater volume and greater demand and draws the neighboring municipalities, such as Torrevieja, Pilar de la Horadada and Guardamar. The foreign market is getting to know the benefits of the climate of Orihuela Costa and Torrevieja, but quite a few of them go down to the province of Murcia, to nearby municipalities such as San Pedro del Pinatar or San Javier.

According to this expert, “the coastal area of ​​Orihuela has nothing to do with its urban center, separated more than 30 km, where now a first promotion of new construction has begun. “It is a tourist area where there is no seasonality for the market. The national market in summer seasons increases activities, but the foreign market is continuous all year long, many are here to stay, not only retirees but complete families with children that can be integrated into the labor market.”

The good performance of the real estate market on the Costa Blanca has allowed to absorb practically the ‘stock’ of housing that was built during the years of the ‘boom’. According to Tinsa, the ‘stock’ of holiday homes is residual in Guardamar del Segura and Pilar de la Horadada, and scarce in Torrevieja and Orihuela. What is to be seen now is how many more years of activity and journey is left for the market.